Yao Ming (b. September 12, 1980) is a center for the Houston Rockets. He's currently the tallest player in the NBA, at 7'6". He is one of China's best-known athletes, with sponsorships with several major companies, and he has been the richest celebrity in China for five straight years. His rookie year in the NBA was the subject of a documentary film, The Year of the Yao, and he co-wrote, along with NBA analyst Ric Bucher, an autobiography titled Yao: A Life in Two Worlds. 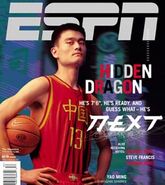 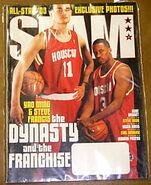 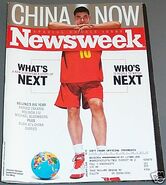 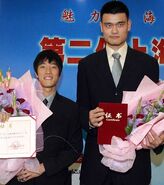 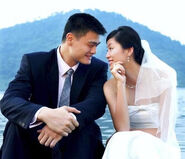 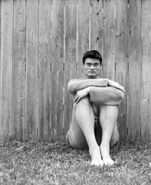 Yao Ming suffering from a stress fracture in his left foot. February, 2008.

Lin Hao with Yao Ming at the opening ceremony of the 2008 Beijing Olympics.

A collection of Yao Ming toys.

Yao was born in Shanghai, People's Republic of China. His father, Yao Zhiyuan, is 2.08 m (6 ft 10 in) ; Yao's parents were the tallest couple in China at the time of his birth.

Yao first tried out for the Shanghai Sharks junior team of the Chinese Basketball Association (CBA) when he was 13 years old, and practiced for 10 hours a day to make the team. After playing with the junior team for four years, Yao joined the senior team of the Sharks at age 17, and averaged 10 points and 8  rebounds a game in his rookie season. However, his next season was cut short when he broke his foot for the second time in his career, which Yao said decreased his jumping ability by four to six inches (10 to 15 cm). The Sharks made the finals of the CBA in Yao’s third season and again the next year, but lost both times to the Bayi Rockets. When Wang Zhizhi left the Bayi Rockets to become the first NBA player from China the following year, the Sharks finally won their first CBA championship. During the playoffs in his final year with Shanghai, Yao averaged 38.9 points and 20.2 rebounds a game, while shooting 76.6% from the field, and made all 21 of his shots during one game in the finals.

Yao was encouraged to enter the NBA Draft in 1999 by Li Yaomin, the deputy general manager of the Shanghai Sharks. Yao also said he believed O'Neal was joking, and was second in the NBA Rookie of the Year Award voting to Amare Stoudemire, and a unanimous pick for the NBA All-Rookie First Team selection. He was also voted the Sporting News Rookie of the Year, and won the Laureus Newcomer of the Year award.

Before the start of Yao's sophomore season, the Rockets' head coach Rudy Tomjanovich resigned due to health issues, and long-time New York Knicks head coach Jeff Van Gundy was brought in. After Van Gundy began focusing the offense on Yao, Yao averaged career highs in points and rebounds for the season, and had a career-high 41 points and 7 assists in a triple-overtime win against the Atlanta Hawks in February 2004. He was also voted to be the starting center in the 2004 NBA All-Star Game for the second straight year. Yao finished the season averaging 17.5 points and 9.0 rebounds a game. Although Yao said that Francis and Mobley had "helped [him] in every way [his] first two seasons", he added, "I'm excited about playing with Tracy McGrady. He can do some amazing things." After the trade, it was predicted that the Rockets would be title contenders. In the first knockout round, however, China was defeated by eventual finalist Greece. Ye was not fond of Yao at first, but finally accepted him after he gave her the team pins he had collected during the 2000 Summer Olympics.

Yao is one of China's most recognizable athletes, along with Liu Xiang. He has led Forbes' Chinese celebrities list in income and popularity for five straight years, earning 54.6 million U.S. dollars (387.8 million yuan) in 2007. A major part of his income comes from his sponsorship deals, as he is under contract with several major companies to endorse their products. He was signed by Nike until the end of his rookie season; when they decided not to renew his contract, he signed with Reebok. He also had a deal with Pepsi, and he successfully sued Coca-Cola in 2003 when they used his image on their bottles while promoting the national team. However, he has since signed with Coca-Cola for the 2008 Olympics. Garmin, and McDonald’s (his favorite restaurant when he was young).

Yao is the star of the movie The Year of the Yao which chronicles his first year in the United States.

Yao has also participated in many charity events during his career, including the NBA’s Basketball Without Borders program. In the NBA's offseason in 2003, Yao hosted a telethon, which raised 300,000 U.S. dollars to help stop the spread of SARS. In September 2007, he held an auction that raised 965,000 U.S. dollars (6.75 million yuan), and competed in a charity basketball match to raise money for underprivileged children in China. He was joined by fellow NBA stars Steve Nash, Carmelo Anthony, and Baron Davis, and movie star Jackie Chan. After the 2008 Sichuan earthquake, Yao donated $2 million to relief work, and created a foundation to help rebuild schools destroyed in the earthquake.

Yao is married to Ye Li, a former player for the China women's national basketball team.

Community content is available under CC-BY-SA unless otherwise noted.
Advertisement